As the week draws to a close, Bitcoin seems to be continuing to strengthen its position over the $10k mark; in fact, BTC has spent most of this week sitting comfortably over $11k, and seems to be holding strong.

While Bitcoin’s upward climb could primarily be the continuation of the bullish wave that began to unfurl during Q3, there have been several high-profile investments that may have called a bit of extra positive attention to Bitcoin.

Join your industry leaders at the Finance Magnates Virtual Summit 2020: Register and vote for the FMLS awards

“I think institutional investment is what’s keeping bitcoin about the $10,000 mark,” Choros told Finance Magnates. “In fact, I don’t know if we will ever go below $10,000 again, especially if more institutional investors come out of the woodwork in the next couple of months.”

Ian Kane, chief operating officer of blockchain-based fintech platform Ternio, told Finance Magnates that “a lack of supply” may also be propping BTC up over $10,000. “Most of the weak hands have left and now you have people that are holding,” he said.

Combined with the news about Square, Stone Ridge, and Microstrategy, “things are lining up nicely for a big BTC bull run, but no one knows exactly when that will take place,” Kane said.

”[G20’s] Announcement Itself Is a Further Boost to the Credibility of Distributed Ledger Technology.”

Beyond the investment news, this week has also brought some policy-related developments that have shone a little extra light onto cryptocurrency on a global scale.

Earlier this week, news broke that the Group of 20 (G20) is working with the International Monetary fund (IMF), the World Bank, and the Bank for International Settlements (BIS) to complete regulatory frameworks that would formalize the use of a central bank of digital currencies (CBDCs) in traditional banking systems.

The announcement may represent the first time that G20 has made meaningful movement toward creating any kind of international or supranational framework that would be relevant to the cryptocurrency and blockchain space. The group has previously stated that cryptocurrencies do not present a threat to monetary stability and urged cryptocurrency exchanges to collect appropriate data from their users.

While this may have brought some extra attention to the cryptocurrency space (which may have slightly boosted prices in the short term), the long-term effects of the news are unclear.

Indeed, Maurizio Raffone, Chief Financial Officer at Credify, told Finance Magnates that “the announcement itself is a further boost to the credibility of distributed ledger technology.”

”The Crypto Markets Will Surely Benefit from a Positive Spillover Effect”

Therefore, “the crypto markets will surely benefit from a positive spillover effect” related to CDBC activity, Raffone explained. “This positive momentum will further support financial institutions’ investments in this technology, as Central Banks will have to work with banks in order to manage their CBDCs effectively.”

At the same time, though, “with regards to retail participation in crypto, underlying instruments like Bitcoin or Ether have very little in common both technically and economically with a CBDC that I don’t see particularly strong support from this news.”

Meltem Demirors, chief strategy officer at CoinShares, told Finance Magnates that in fact, over the long-term, “the proliferation of regulated CBDCs further highlights the fundamental difference between national currencies and cryptocurrencies, and their very different uses.”

“In terms of market impact, there wasn’t any,” he said.

“Bigger picture, the CBDC announcement is just another signal that governments are concerned that criminal elements can move from fiat directly to private sector stablecoins to launder money. If there are coins representing fiat currencies, governments would naturally prefer to be the issuer of those coins.”

”When It Comes to Risk Assets, It’s All about the Fed, and It Always Will Be So.”

However, the most significant piece of news this week in terms of crypto markets may have had no explicit association with the crypto space at all.

Turning Challenges into Opportunities: A Conversation with Tickmill’s Carla NemrGo to article >>

“The article implies that the Fed will inject money to kickstart the financial system because fiscal talks have stalled,” Mr. Noble explained. “This news is likely what helped hold up crypto and possibly get a rally going. When it comes to risk assets, it’s all about the Fed, and it always will be so.”

Indeed, while United States President Donald Trump’s COVID-19 recovery seems to have calmed down traditional financial markets, all eyes are on the United States presidential election to determine what is next for the financial world, including crypto.

Does a ‘Dollar Devastation’ Lie Ahead?

Thomas Perfumo, head of intelligence at US-based cryptocurrency exchange Kraken, told Finance Magnates that regardless of who is elected on November 3rd, “markets are anticipating further fiscal stimulus following the election, which could weaken the dollar and lead to assets that are traded in USD, including bitcoin, to increase in price.”

The next round of economic stimulus payments could be positive for Bitcoin: “Bitcoin has displayed a negative correlation to the USD,” Perfumo told Finance Magnates. “It fell 5% when the greenback strengthened back in August. A dollar devaluation in the wake of the election could, therefore, take bitcoin past key price resistance points and lead to further bullish momentum.”

Indeed, “as both parties plan to deliver massive stimulus packages following the election, I don’t believe it will do much to change the long-term narrative for digital assets,” Perfumo said.

“That said, and without speculating on the outcome, a Biden victory and a Democrat-controlled Congress would likely result in much higher stimulus and a shift towards greater taxation on corporations and wealthier individuals. This could lead to choppier markets and potentially closer correlations between cryptocurrencies and other asset-classes, such as equities, at least in the short-term.”

”Due to Bipartisan Support of Unprecedented Government Spending and Stimulus, It Does Not Matter If Trump or Biden Wins This Years’ Election.”

However, Celsius founder and chief executive, Alex Mashinsky told Finance Magnates earlier this month that a second Trump term could result in just as much spending, albeit in different places.

“Combine either with the Fed continuing to do whatever it takes to keep the safety net under the US economy and you can see how a mountain of debt, greater than all the debt anyone had in history, will come bearing down on the US dollar.”

Over the long term, this could seriously degrade the Dollar’s position as the world’s most popular currency: “we may be able to hold back the debt for a while, but each passing day we deplete the trust the entire world has in the dollar and soon enough we will be left holding the bag with all these worthless dollars,” Mashinsky explained.

“While this may be good for Bitcoin and crypto, it is not good for democracy and for the world order as we know it.”

Marc Grens, President & Co-Founder at DigitalMint, echoed Mashinky’s sentiments: “since the beginning of the Covid-19 shutdowns in March 2020, the government has increased the federal debt to unprecedented levels never seen before since the creation of US fiat monetary policy.

“As a result, the US dollar has been diluted significantly, affecting inflation and prices. As a scarce digital asset, deemed the reserve currency of the internet worldwide, Bitcoin acts as a hedge against inflation.

“Due to bipartisan support of unprecedented government spending and stimulus, it does not matter if Trump or Biden wins this years’ election as both parties have proven to leverage the United States’ future for short-term gain and recognition. As a result, Bitcoin will continue to strengthen against sovereign currencies, including the US dollar during this pandemic and beyond.”

“The DeFi Space Had a Party in August, the Party Broke up in September, and October Is the Hangover.”

While Bitcoin seems to be continuing on an upward trajectory, most of the DeFi assets that performed highly over the summer have and are continuing to sink as Q4 begins. 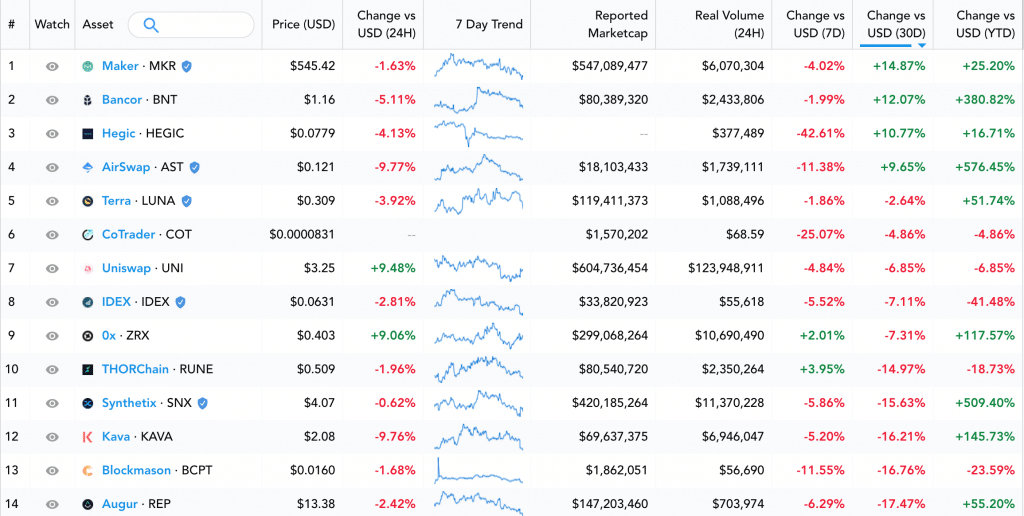 “The DeFi space had a party in August, the party broke up in September, and October is the hangover,” Token Metrics’ William Noble said.

“Mr. Market is currently sorting out which DeFi coins will survive and which ones won’t. It’s a healthy process that will preclude the next up move in crypto.”

What are your thoughts about where BTC, DeFi tokens, or other crypto assets are headed next? Let us know in the comments below.